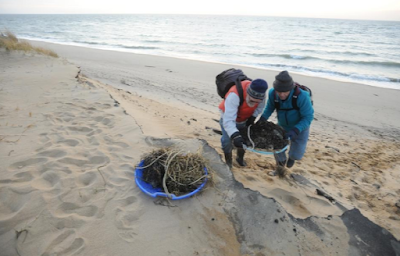 
WELLFLEET — Charlie Marcus, 12, and his father Peter collapsed in their Eastham hotel room Monday night. They’d flown out from Los Angeles over the weekend specifically to go out on patrols with Massachusetts Audubon’s Wellfleet Bay Wildlife Sanctuary volunteers, rescuing endangered tropical sea turtles that succumbed to the first cold water temperatures of the season and washed ashore.

Turtle stranding season is here, with 80 sea turtles rescued off Cape Cod Bay beaches over the past week, and brought into the sanctuary for their initial treatment before being shipped to the New England Aquarium turtle hospital in Quincy for rehabilitation.


Monday proved particularly tough. The winds turned bitter cold and blew hard out of the southwest, and the two walked the beaches, picking up helpless turtles and transporting them back to the sanctuary, where they also assisted staff and volunteers who were measuring, cataloging, and taking the first steps in treating the first big pulse of strandings this year.

“There was so much life and death all around us, we were exhausted,” said Peter as the two headed out Tuesday afternoon with volunteers Barbara Brennessel and her husband, Nick Picariello, of Wellfleet, for a mile-long patrol from Great Island to Duck Harbor.

“It was really cold and windy,” Charlie Marcus said.

Every year, hundreds, sometimes thousands of these cold-blooded sea turtles, Kemp’s ridley, green turtles, and loggerheads, become trapped in Cape Cod Bay in the fall, and either cannot find their way out or leave too late and hit a wall of cold water as they approach the open ocean and turn back to the fleeting warmth of the shallow bay. They attempt to shelter in place, waiting out what they may believe is a passing cold front. But with time and the deepening cold, their metabolism slows down and muscles no longer function. They surface, immobilized and at the mercy of the wind that either blows them toward the shore where they suffer from exposure to the biting winds, or out to sea where they eventually die.

Hundreds volunteer every year at the Wellfleet sanctuary for the turtle patrols and rescue work. Brennessel, a retired Wheaton College professor, found it was a natural extension of research work she’d done on terrapin turtles at the sanctuary, although her motives transcended the dispassionate approach of a scientist.

“Every animal is unique, and it’s important because they are endangered species,” she said as she rifled through a mound of dead eelgrass, extracting, and pocketing a plastic sandwich bag entangled in tangled black strands. “They are suffering too, and I feel compassion.”

Charlie was 5 when he read about the diamondback terrapins — which are endangered in Massachusetts, but not listed federally, and live in the brackish marshes from Cape Cod to Texas. He was moved by the Wellfleet sanctuary’s efforts to improve their chance for survival by improving habitat, protecting nests and raising hatchlings for eventual release, and started sending donations.

This year, for his bar mitzvah charity project, he decided to focus on sea turtles. Peter Marcus, a Los Angeles intellectual property rights attorney, was born in Brooklyn and lived in the Berkshires, but spent many childhood summers in Wellfleet. The two decided to return to the Cape to experience turtle rescue firsthand.

“Understanding the full spectrum of life is something I hope to teach my children in a way they don’t teach in school,” Marcus said.

“He’s got that empathetic gene,” Marcus said of his son.

All sea turtle species are listed under the U.S. Endangered Species Act.

“They’ve been here longer than people and we want them to stay that way,” Charlie said.

[Source and more photos can be found at the Cape Cod Times website HERE.]
Posted by C.A. Chicoine at 8:30 PM No comments: