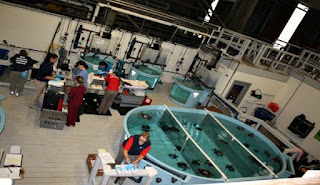 In the largest transport of rescued turtles in the New England Aquarium's 40-year history, a U.S. Coast Guard plane loaded with dozens of endangered sea turtles recovering from hypothermia were flown from Massachusetts to Florida.

The Cape Cod Online reports an C-130 plane with 35 sea turtles on board took off from the Otis Air National Guard Base on Cape Cod Friday morning and landed at Orlando International Airport that afternoon.

Volunteers rubbed down each turtle with petroleum jelly to retain moisture during the flight, said Tony LaCasse, spokesman for the aquarium.

The turtles, rescued from the Wellfleet Bay Wildlife Sanctuary off Cape Cod, were recovering at multiple marine animal rescue facilities.

The flight cleared much-needed space due to the unprecedented number of sea turtles stranding on the Massachusetts coast in recent days.

LaCasse said the center surpassed its capacity for sea turtles after more than 100 arrived in the past 10 days.

The traveling turtles are part of at least 150 rescued from the beaches of Wellfleet Bay on Cape Cod by the Massachusetts Audubon Society, LaCasse said.

Of the 35 turtles flown to Florida, 15 were loggerheads, each weighing between 40 and 100 pounds and ultimately putting a strain on hospital resources because of their size, LaCasse said.

The aquarium’s tanks can normally hold five of the juvenile Kemp’s Ridley turtles, which usually account for 90 percent of the turtles found stranded. But the tanks can hold only one loggerhead.

The aquarium usually flies turtles on private planes, but this time the "National Oceanic and Atmospheric Administration (NOAA) intervened on an inter-federal agency level, and asked the Coast Guard if they had aerial resources to assign this flight,” LaCasse said.

The Coast Guard and NOAA are mandated to assist with turtle rescue efforts because of Congress’s Endangered Species Act, he said.

Sea turtles are cold-blooded reptiles but are still susceptible to infections at low body temperatures.

As ocean temperatures drop in the fall, the turtles get trapped in the Cape Cod Bay because they instinctively want to travel south to warmer climates, except the only way to do that is to exit the north end of the bay.

Many of the turtles develop hypothermia and wash ashore weeks later. By this time, many have no fat reserves and are suffering from dehydration and pneumonia and have fungal infections.