Why Are Endangered Sea Turtles Showing Up Cold and Seemingly Lifeless on Northeastern Shores?


A Kemp’s ridley turtle lies motionless, seemingly dead, along the high tide line on Skatet Beach. It’s exactly as Bob Prescott predicted. Prescott, the director of Mass Audubon’s Wellfleet Bay Wildlife Sanctuary on Cape Cod, bends down to move the turtle out of the reach of the cold ocean water, and covers it in seaweed to shield it from the wind.

It’s 6:45 a.m. on November 24, 2016. When Prescott looked at the weather report the previous night, he saw that one of the year’s first winter storms would soon be descending on New England, crossing the Northeast from Buffalo to the Eastern coast and bringing with it icy temperatures, lake effect snow, and chilling winds. That’s when he knew he would be up early in the morning, walking the beaches of Eastham and Orleans, in search of turtles.

The middle of October marks the beginning of a dangerous “cold stun season” for sea turtles caught on these Northeastern shores. Hundreds of turtles, mostly Kemp’s ridleys, wash ashore each year once ocean temperatures sink to 50 degrees F. The geography of the Long Island Sound and the curving Cape Cod Peninsula create a barrier to turtles trying to swim south, away from rapidly cooling waters. Before they can flee, icy waters often stun the cold-blooded reptiles into a paralyzed state, leaving them at the mercy of the tides, currents, and wind.

Fortunately, Prescott has cold stun stranding predictions down to a science. Using years of wind and stranding pattern data, he understands how turtles are pushed by wind to specific beaches along the inner arm of the Cape Cod peninsula. But it wasn’t until recently that experts were even aware of the mass turtle strandings that occur across Northeastern shores. Turtle bones from archaeological digs suggest the phenomenon has been occurring for hundreds of years, possibly since the formation of the Cape.

Whether turtles disappeared at some point from Northeastern waters or we simply were unaware of their presence remains unclear. But in the past 30 years, scientists have been stumped by a sudden upsurge in turtles found stranded, motionless and on the brink of death along these shores.

Turtles are often killed by heavy machinery used along the pathways

AGAWAM, Mass. (WWLP) – Workers from Eversource, tree service contractors, and environmental consultants, along with biologists from the Massachusetts Division of Fisheries and Wildlife gathered on the pathway under the high tension power lines on Moylan Lane in Agawam.

“Eversource has more than 2300 miles of transmission rights-of-away in the three states that we operate, more than 600 miles here in Massachusetts. So we have a big stake in making sure that their habitat is protected and we take our role as an environmental steward very seriously,” said Frank Poirot of Eversource.

“Turtles can often get killed by machinery and heavy equipment so our goal is to train their staff as they’re working through these rights-of-way so they can avoid that direct mortality. Pick the animal up and move it to safety and continue on with the project,” said Mass Wildlife Endangered Species Biologist David Paulson.

The Eastern Box turtle and the Wood turtle commonly live and breed along transmission rights-of-way.

Every year Eversource holds the training for those who work along those paths. 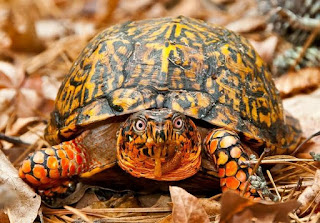 Clarke placed transmitters on the backs of female box turtles and found that they flocked to the cleared areas under the Outer Cape’s power lines during nesting season. Photo courtesy Raymond Clarke

It’s not easy keeping up with box turtles.

Dr. Ray Clarke, a scientist who spent three years tracking the land-roving reptiles through the woods of Truro and Wellfleet, learned that first-hand.

“It’s hard work. You’re out in 80 to 85 degrees, alone. It's fine going through the pine oak forest. But when you enter the wetlands it can become impenetrable. Once I had a fall over muck — the log broke and I started to sink in. Brier can tear right through your jeans. Cell phone service is spotty,” Clarke says.

His study focused on how the right-of-ways around the Outer Cape’s power lines might be affecting the breeding habits and survival of Eastern box turtles, which are listed as a species of special concern in Massachusetts. A Truro resident, he’s received degrees from McGill and Yale universities and taught ecology and “many kinds of biology,” including evolutionary and marine, at Sarah Lawrence College, where he’s now a professor emeritus. He wanted to avoid retirement’s shock with an ongoing science project, so he brainstormed with Robert Cook, Cape Cod National Seashore ecologist, and initiated a study to appease his curiosity about the relationship between power lines and box turtles.

Clarke wasn’t sure he’d find turtles under the lines, but because he knew from the scientific literature that these terrestrial turtles like to nest in open, disturbed places, he guessed he would

He was correct. From 2011 to 2013, in May and June, he captured 18 females under NSTAR/Eversource power line right-of-ways from South Truro to North Wellfleet. As the turtles lay only four to six eggs, the nests were very hard to discover, so he qualifies the accuracy of whether they were nesting or not: "I only saw one turtle laying eggs, but the pattern of females moving to the right-of-way during the nesting season is pretty strong circumstantial support for that view."

With grants from the Cape Cod National Seashore and help from Lori Erb, who was surveying turtles statewide for the Mass. Natural Heritage and Endangered Species Program, Clarke placed radio transmitters on the backs of adult female turtles, tracking them with a radio antenna.

“Each turtle’s ‘ping’ is a separate frequency, so you know who you’re following. My expectation was that when the signal would get loudest you’d be near the turtle. But radio waves bounce off trees and hills, and the terrain was hilly, so it could get frustrating when I couldn’t track them efficiently.”

It was a learning curve. “Using tracking equipment was new to me. I'm not a turtle guy. I’m a fish guy.” Describing years of field work, Clarke said he would scuba dive to do population studies of fishes of coral reefs, asking, “How can so many species, hundreds, exist together?” He wanted to understand how they compete and divide up niches, discovering in the process new information which he has published in scientific journals.

The biologist slogged on for more than three years, following his turtles from spring through November, until they dug into the soil under the leaf litter to hibernate. He found that “over a half to two-thirds came in from pretty far, from over 300 meters, to nest along basically a pretty narrow one-kilometer bandwidth the length of the right-of-way.” (He also placed data loggers in the earth to discover that nest areas were 12 or so degrees warmer than turtle hiding places in the forests.)

Clarke’s study suggests, but doesn't yet prove, "a potential for a significant negative impact of the right-of-ways on the long-term health of this population.” Using the “precautionary principal” Clarke advises, “We should avoid potential harm until we know more”— that is, until we know for sure that adult turtles nesting under lines on right-of-ways, as well as hatchlings, are not being run over by utility trucks or suffering illness or death due to sprayed chemicals such as Glyphosate, which the utility company uses to suppress weeds.

Clarke adds that the right-of-ways are also inviting to raccoons and other predators that dig up and eat eggs.

While the Seashore has the biggest population of box turtles in Massachusetts, Clarke says that because of their ability to attain advanced age — 50 to 80 years and beyond — the turtles may appear to be doing well when in fact, because their rate of reproduction is so slow, any hit to their population has repercussions for a very long time.

Clarke says he may write a memoir of his exploits as a field biologist. He is studying how to do that with Rosalind Pace, and his paper on the box turtle study is currently under peer review for possible publication.

Source: Wicked Local
Posted by C.A. Chicoine at 9:13 AM No comments: