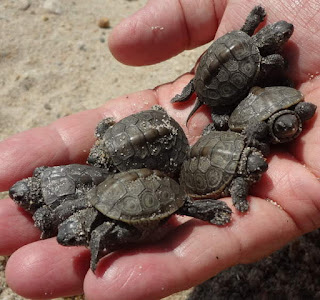 MARION — On the state's endangered species list the diamondback terrapin turtles are classified as threatened. But, Marion resident Don Lewis says don’t count them out quite yet.

Last week, Lewis and his wife Sue Wieber Nourse discovered a nest of sixteen baby terrapins on a local beach. After a little tender, love and care, Lewis says the babies are thriving.

Known as the “Turtle Guy,” Lewis is the executive director of the Massachusetts Association of Conservation Districts and an expert on turtles. For the past decade, he and his wife, who is a research scientist and CEO of Cape Cod Consultants, have been studying the terrapin turtles.

The turtles are rare in the Marion, Mattapoisett and Rochester-area, with only an estimated 100 terrapins surviving in the South Coast habitat, Lewis said.

The terrapins have been a favorite prey among animal predators as well as with humans. Lewis said that the baby turtles were once a delicacy harvested by the barrels in the early 1900’s.

The terrapins have since been taken off the menu, but Lewis said the turtles nesting grounds by the shore have inadvertently collided with beach-goers.

“We humans like their habitat more than they do and we’re bigger and badder,” Lewis said. “They have to nest so it’s a competition with human development.”

Once the mother turtles lay their eggs, the eggs spend roughly two months incubating in the sand before hatching.

In an effort to protect the nests, Lewis and Nourse build a predator excluder (a cylinder made from chicken wire) around the nests that they come across.

“It keeps predators away, but you buy yourself a burden,” he said. “The babies can’t get out by themselves so we have to check the nests frequently.”

The couple have even opened their home to the small hatchlings with a “turtle garden” in their backyard to help the weaker turtles get into fighting shape before being released into the wild.

With a little help, Lewis said the turtles are making a comeback.

“I’ve been doing the same work in Wellesley for 30 years and we’ve definitely seen the numbers turn around significantly,” Lewis said.

For more on the couple's work, check out their website!


BASSETERRE St. Kitts, August 18th, 2012  --   A female leatherback sea turtle bearing flipper tags WC 2551 on the left and WC 2507 on the right was captured August 9th, 2012 off the coast of Cape Cod, Massachusetts, USA, by a research team led by Kara Dodge, a University of New Hampshire PhD student. These flipper tags have been tracked back to St. Kitts! The St. Kitts Sea Turtle Monitoring Network (SKSTMN) received this very exciting news Tuesday via Prof. Julia Horrocks, the Coordinator of the Wider Caribbean Sea Turtle Conservation Network’s (WIDECAST) Marine Turtle Tagging Centre at the University of West Indies in Barbados, who supply the flipper tags used by the SKSTMN. 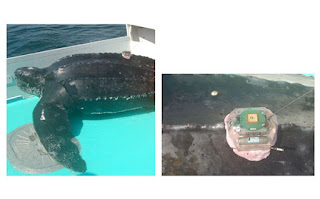 Ms. Dodge’s research focuses on the movements and behaviour of leatherbacks in their foraging grounds off Cape Cod.  Her team uses a breakaway hoopnet to catch them and then tracks them with GPS-linked satellite tags (see photos). This leatherback was only the second tagged female that had been captured over the course of the project, which has been running for four years and includes capture of adult males, females, and subadults.

Following a health assessment and transmitter placement, the female was given the name Kitty and was released. The transmitter placed on her will provide important data over the course of the next few months and will enable scientists and the public to track her movements online.  Kitty’s movements can now be tracked online by going to this link <http://www.seaturtle.org/tracking/index.shtml?keyword=Kitty>.

Kitty was only the third leatherback sea turtle to be flipper tagged in St. Kitts during the SKSTMN’s first year of leatherback night patrols in 2005. She was originally tagged on 26 April 2005 while nesting on Keys Beach and then returned to nest on Keys Beach three times in 2007, once on North Friars in 2009, and twice on Keys Beach in 2011.  The SKSTMN expects to see Kitty again on the nesting beaches in St. Kitts in 2013 if she follows her established schedule.

It is not unusual for female leatherback sea turtles to migrate over 10,000 miles between their nesting and foraging grounds.  This highly migratory nature makes them a shared resource both regionally and internationally and drives home the importance of sharing critical biological information gathered on both the nesting beaches and foraging grounds. Fortunately for Kitty, St Kitts has already taken steps to protect her nesting ground through the designation of the UNESCO St. Mary’s Biosphere Reserve that includes Keys Beach, the main leatherback nesting beach on the island.

Leatherback sea turtles are classified globally as Critically Endangered because scientists have determined that their populations have been reduced by more than 80% over the last century.  Only 1 in 1,000 leatherback sea turtle hatchlings will survive to adulthood, and the females that survive will not return to nest on our shores until they are around 25 years of age.  Disturbing one of these ancient creatures during nesting carries a fine of EC$5,000. We urge all citizens to assist in efforts to conserve and protect sea turtles and their habitat so that they will be around for generations to come.

More information on Cape Cod leatherback research can be found at <http://www.tunalab.org>. For more information on sea turtles and regulations regarding them in St. Kitts please visit http://www.stkittsturtles.org. Please report any sea turtle sightings, nesting events, etc. to the Sea Turtle Hotline at
764-6664 or the St. Kitts Department of Marine Resources at 465-8045.

St. Kitts Sea Turtle Monitoring Network
The St. Kitts Sea Turtle Monitoring Network (SKSTMN) is a registered Non- Governmental Organization (NGO) in St. Kitts and a qualifying Public Charity under the United States Internal Revenue Code Sections 501(c)(3) and 170(b)(1)(A)(vi).  The SKSTMN was founded in January 2003 with the mission to: implement a long standing sea turtle conservation management program under the direction of the St. Kitts Department of Marine Resources; promote community awareness of the plight of sea turtles; and provide non consumable sources of income to communities as an alternative to the sea turtle harvest in an effort to decrease pressure on St. Kitts turtle populations. 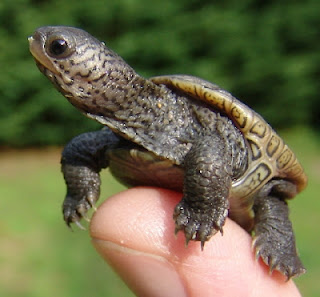 MARION —
Monday witnessed the first emergence of diamondback terrapin hatchlings on the South Coast of Massachusetts. Sixteen baby turtles were born on a barrier beach in Marion. From the end of May through early July, female terrapins, a threatened species in the state, swam ashore on coastal beaches in estuaries of Buzzards Bay and Cape Cod Bay. Now, after incubating in eggs beneath the warm summer sand for 10 weeks, the first hatchlings have begun to emerge from the few nests that have avoided depredation. Without a little human kindness and assistance, predation rates for turtle nests soar into the 90 percent range.

Don Lewis and Sue Wieber Nourse, of Turtle Journal, patrolled this barrier beach in Marion where they have documented terrapin nesting and have protected many such nests from predation. Wieber Nourse spotted hatchling tracks in the sand that disappeared into the surrounding salt marsh. Lewis deduced the likely location of the nest from the tracks and gently excavated the area with his fingers. About three inches below the surface he began encountering baby turtles that had “pipped” their eggshells with their prominent egg tooth, but were still a bit too immature to venture safely into the wild. Unfortunately for these remaining hatchlings, 10 of their siblings had left the nest overnight. With the scent that they left behind in their discarded eggshells, they would have set off the dinner bell for a host of predators. These babies would have been devoured in the evening as raccoons, skunks, foxes and other predators conducted their own hatchling patrols of the beach.

With a little help from human guardians, six tiny terrapins were recovered from the nest. They still need a few more days of maturity before they can be safely released into the nursery salt marsh abutting the barrier beach. But their odds of survival have been significantly enhanced as turtle researchers work to restore declining populations of diamondback terrapins in Buzzards Bay estuaries. Terrapins are listed as a threatened species in Massachusetts.

Beyond terrapins on bayside beaches, other turtle hatchlings should be popping up throughout the South Coast within the next few weeks: Eastern box turtles in your yard, painted turtles and snappers in uplands surrounding lakes and ponds, and spotted turtles in wetlands and bogs. Advice from the Turtle Journal Team: Slow down and look down. The life you save may be a baby turtle.