Turtles and tortoises have existed relatively unchanged for nearly 215 million years, yet the world’s 300 species of chelonians are arguably the most endangered vertebrates on Earth! Herpetologist Ian Ives will focus on the turtles of Cape Cod (with living examples).

DIRECTIONS: Cross the Sagamore Bridge onto Cape Cod. From Route 6, take exit 7 to Yarmouth Port. Go north one mile on Willow Street, and take a left onto Route 6A west. Proceed for approximately one mile, then take a right on Bone Hill Road (where you’ll see a large sign for the Harbor Point Restaurant) and a smaller sign for Long Pasture. Follow Bone Hill Road past the upper trail head parking area to the end of Bone Hill Rd and look for a large white Sanctuary sign on your left. Take this driveway to the Visitor Center parking area. Parking is available in the field to your left, and around the circular drive in front of the Visitor Center.

Share this event
Print this event listing
E-mail this listing
Source:
http://www.capeevents.com/event.cfm?Event_ID=9893
Posted by C.A. Chicoine at 8:17 PM No comments: 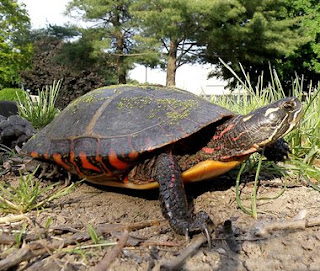 Massachusetts wildlife officials seek public's help locating top turtle roadkill sites
Question: Why did the turtle cross the road?
Answer: A genetic imperative.
By Stan Freeman for MassLive.com
Photo by Stan Freeman
In recent weeks, turtles have been climbing out of the comfortable confines of ponds, lakes and streams, driven by strong reproductive instincts that have launched them on a search to find a suitable spot on dry land to lay eggs.
However, a huge number of them are killed on roadways as they make the effort, and that worries state wildlife officials who are asking the public’s help in identifying turtle death hot spots.
“Many turtle species in Massachusetts are in decline and a lot of that has to do with road mortality,” said Marion E. Larson, a wildlife biologist for the state Division of Fisheries & Wildlife.
“So we’re asking people to tell us about where they are seeing road-killed turtles to try and identify where there are highway crossings with a lot of mortality,” Larson said. “Then, as roads are repaired by departments of transportation, they may be able to change the design to make it more turtle friendly.”
The Turtle Roadway Mortality Study is a joint multi-year effort by the state Department of Transportation, the state Natural Heritage and Endangered Species Program and the Vernal Pool Association. The online citizen reporting page can be found at: http://linkinglandscapes.info.
Massachusetts has 10 native turtles, all of which lay their eggs on land, even though some (including the state’s largest native turtle, the snapping turtle) almost never venture from water at any other time.
The peak time for egg laying is late May to early July. Typically, the eggs, which are laid in holes dug in loose or sandy soil, hatch in two to three months.
Begun in 2010, the turtle study will need several years of data before the researchers “can feel confident that we’ve identified the majority of the significant roadkill sites” in the state, said Michael T. Jones, a biologist at University of Massachusetts in Amherst. Jones is one of the project’s coordinators.
“The worst sites that we currently know of are in eastern Massachusetts, where road density and traffic volume are greatest. At one particularly bad site in Middlesex County, more than 100 turtles of multiple species are killed each spring,” he said.
At that site, along Route 119 in Littleton, the state is putting in a “turtle-friendly” culvert, as part of a scheduled road upgrade, that will act as a tunnel to allow them to cross beneath the road, Larson said.
As road sections throughout the state come up for repair or upgrade, the list of turtle-mortality hot spots will be consulted to see if a change could be made to the project design to lower the mortality, Larson said.
Turtles can live long lives, with some box turtles reaching 100 years. Since some species do not reach reproductive age until they are age 10 or more, early deaths can have a great impact on their population, Jones said.
“Turtle populations appear to be more negatively affected by high levels of roadkill than amphibians and most mammals,” he said.
However, that occurs because of the breaking up of landscapes by roads and development. According to the state Division of Fisheries & Wildlife, the number one reason why turtle populations – as well as those of many animals – are in decline is the fragmentation, degradation and loss of habitat.
Source: http://www.masslive.com/news/index.ssf/2011/07/massachusetts_wildlife_officia.html
© 2011 masslive.com. All rights reserved.
Posted by C.A. Chicoine at 5:54 PM No comments: