SOUTH WELLFLEET — Beach patrols Saturday night turned up another half-dozen turtles, washed up on the sand, immobilized by the cold water and wind.

Turtles become "cold-stunned" when the water temperatures drop, causing their body metabolism to slow to the point where they can no longer swim. They then come to the surface so that they can breathe and float to shore. While most of the sea turtles that visit the Cape in warmer months have already headed south, some stragglers inevitably stay behind, continuing to feed while waters remain warm.

Kemp's ridleys are listed under the federal Endangered Species Act. They can grow to where the shell measures two feet in length and they weigh 75 to 100 pounds. The green sea turtle is also listed as an endangered species and can attain four feet in shell length and weigh nearly 900 pounds.

Including the reptiles found Saturday night, a total of 29 turtles have been discovered on beaches from Sandwich to Provincetown since October. 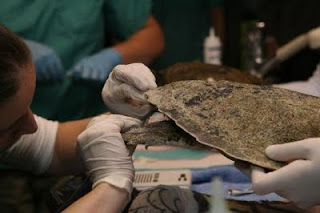 Endangered Kemp's Ridley Turtles Blown Ashore Saturday
BOSTON -- Colder weather and gusty winds pushed a surge of sea turtles onto Cape Cod beaches this weekend, sending rescuers scrambling to find the stranded reptiles before temperatures dip dangerously low overnight.Dozens of endangered sea turtles usually begin turning up on the Massachusetts coast at the beginning of November, stunned by cold water in the Atlantic Ocean, but warmer-than-average temperatures this year kept the turtles at bay for a few extra weeks, New England Aquarium spokesman Tony LaCasse said. LaCasse said the colder weather and blustery northwest winds this weekend caused the turtles to begin washing ashore along beaches from Dennis to Truro.Since the start of the Thanksgiving holiday, 10 turtles have been rescued on the Cape by volunteers from the Massachusetts Audubon Sanctuary at Wellfleet Bay, including five turtles that were carried ashore by the high tide on Saturday morning. Exposed on the beach, the turtles are in danger not only of hypothermia and pneumonia, but also shell fractures, infections and attacks from roving raccoons, sea gulls and dogs. In all, 13 turtles have been rescued this year, but LaCasse expects several more to turn up in the coming days.The rescued turtles face a long road to recovery, with rehabilitation periods ranging from months to more than a year. Once the turtles are healthy again, they will be released back into the wild.Over the past 15 years, the New England Aquarium has successfully treated and released more than 500 young Kemp’s Ridley sea turtles. Kemp’s Ridley turtles are the most endangered species of sea turtle in the world, according to LaCasse.
Source: http://www.thebostonchannel.com/news/21748005/detail.html
Posted by C.A. Chicoine at 7:49 PM No comments: 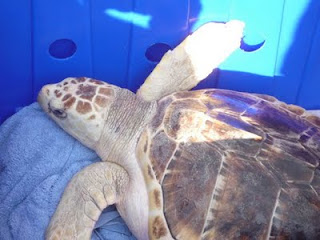 
On this day in 2001, about a hundred naturalists and volunteers combed the beaches of Cape Cod Bay. They are looking for summer visitors who have overstayed their welcome -- dozens of stranded sea turtles.

The turtles, called Kemp's ridleys, are the world's rarest and most endangered sea turtles. Weighing 5 to 10 pounds, usually 2 to 3 years old and about the size of a big green dinner plate, they spend summers feeding on blue mussels and crabs in the warm bay. But in fall, when they should be swimming south, many fail to get out of the bay.

Robert Prescott, director of the Massachusetts Audubon Society's Wellfleet Wildlife Sanctuary, explained: ''When the fall weather turns cold and the water temperature dips below 50 degrees for a sustained period of time, they become so sluggish they can't leave the bay for warmer water. A strong northerly wind pushes them ashore.''

At that point, the wildlife sanctuary mobilizes its annual rescue effort. In 1999, the busiest year for strandings, the volunteers found 220 Kemp's ridleys, a big part of the worldwide population. So far this year, they have found 29. (Scientists do not know the total number but have counted 4,000 nests on beaches at Rancho Nuevo, on the Gulf of Mexico, meaning that there are at least 4,000 females.)

Because sea turtles can die from the cold, naturalists say, the sooner they find the turtles, the better the chance of their survival. Once recovered, they ride -- often in the passenger seat of a naturalist's pickup truck -- to the sanctuary in Wellfleet. A saline solution is applied to their eyes; protective jelly is rubbed on the carapace to retain body heat; some are given fluid intravenously.

Within 12 hours, they are taken to the New England Aquarium in Boston. After an average stay of four months, they complete their recovery at centers like Sea World in Florida, and are usually released in Florida or North Carolina. After that, Mr. Prescott said, the temptations of Cape Cod Bay are no longer a problem for the Kemp's ridleys: they come here only once in their lives. At age 15 to 20, the females return to Mexico to lay their eggs. (NY Times, Nov. 27, 2001)

Help Prevent the Deaths of Thousands of Sea Turtles

Trawl fisheries indiscriminately catch everything in their path, including sea turtles! Untargeted or discarded catch from commercial fisheries, also known as bycatch, is an enormous problem throughout the world.

The National Marine Fisheries Service recognized this problem in 2007 and issued an Advanced Notice of Proposed Rulemaking. Although this was a first step to get in the water requirements to protect turtles from trawl nets, more than two years later a satisfactory rule has yet to be proposed!

Sea turtles have been swimming in the world's oceans for more than 100 million years. While they have been able to survive many challenges over the years, sea turtles are not equipped to withstand the threat humans pose.

Thank you for taking action today!